We encourage teachers, parents, students, church groups and community groups to make use of our educational resources. Please visit the below links for more resources that will enhance your curriculum.

Take Alliance for Life Ontario’s interactive quizzes. Scores will be tallied when the submit button is submitted.

This link is under construction. Please return later to the the quizzes.

Poll after poll indicates that most people are unaware of the basic facts surrounding the topic of abortion.

100,000 pre-born children are lost to abortion every year in Canada. Get the latest stats.

Call our office to request copies of the beautiful booklet, Student’s Guide to Bioethics produced by the Jerome Lejeune Foundation (available in French and English). 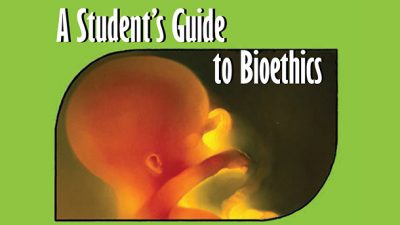 Whether you’re in the classroom or taking the pro-life message to the street, the answers to these simple questions could change the way your students, friends and colleagues think. 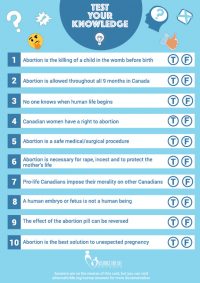 USE THE ACRONYM ‘SLED’ TO DESCRIBE THE HUMANITY OF THE PRE-BORN:

SIZE: Embryos are smaller than newborns and adults, but why does that matter? Do we say that large people are more human than small ones? Men are generally larger than women but that doesn’t mean that they deserve more rights. Size doesn’t equal value.

LEVEL OF DEVELOPMENT: Embryos and fetuses are less developed than the adults they will one day become. Six year old girls are less developed than sixteen year old girls but this doesn’t change their value as human beings. Some people say that self-awareness makes one human. Six week old infants don’t have the ability yet to perform human mental functions and neither do the reversibly comatose, the sleeping and those with Alzheimer’s. But because they are human, they have the right to life. So why not babies in the womb?

ENVIRONMENT: Where you are has no bearing on who you are. Does your value change when you cross the street or roll over in bed? If not, how can it be that the unborn suddenly change from non-human to human after the short journey down the birth-canal. The unborn have the same value as the born.

DEGREE OF DEPENDENCY: Those who depend on insulin, kidney or other medications are valuable because they are human and we may not kill them. Newborn babies, needing others to feed and care for them, are dependant but we value them. So why not give the dependant baby in the womb the same value?