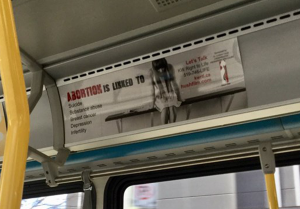 You may have heard that ads produced by Kitchener Right to Life were recently removed from Grand River Transit due to the complaints of Lyndsey Butcher, Executive Director at the SHORE Centre. Butcher claims the ads are not factual. She made the case to have the ads removed by citing a single study from 2009 which found that women’s mental health is not affected negatively by abortion. (See The Record coverage here and CTV’s coverage here.

But research shows that abortion is the source of serious physical and psychological problems for a significant number of women.

CRTL board member, Camilla Gunnarson submitted a letter to The Record in response.

The letter was heavily edited by the Editor due to the fact that letters must be approximately 200 words. They reduced her letter to 213 words and in doing so, removed a significant portion of the letter which addresses the fact that Butcher’s concerns are more ideological than fact-based, as well as SHORE’s affiliation with pro-abortion organizations. This is not an insignificant point as Shore is now an abortion providing organization.

In the hopes of keeping these important facts, Gunnarson re-edited the paper’s version of her letter and was able to reduce the content to 213 words. The paper, however, refused to keep these changes saying,

“… if we publish the letter as you re-edited it, we as a paper will be entering that debate. And we don’t want to go down the road.”

So, The Record who claims to be a “voice of the community” doesn’t want a debate about abortion, even though the issue is now back in the news.

Who is controlling the narrative?

Don’t get us wrong, we realize that having any letter printed is better than no letter at all, but we wonder who is controlling the narrative. Shouldn’t letters to the editor reflect the opinions of the community? Sure, the newspaper has the right to print letters it chooses, but it’s obvious the paper is not interested in an honest debate.

We provide the original version of Gunnarson’s letter as well as her re-edited letter version below.

I find it disingenuous for Lindsey Butcher, the executive director of the SHORE Centre, to claim that women are not affected negatively by abortion. As someone who has worked in the pro-life movement for decades, I’ve encountered countless women who regret their decision to abort. Many of them suffer anxiety, depression and even mental illness. They often lament the fact that no one told them how they would suffer.

In the hopes of having pro-life ads removed from GRT, Butcher sent a letter to Chair, Karen Redman in which she cites a single study from the American Psychological Association which was published in 2009. It stated,“The best scientific evidence published indicates that among adult women who have unplanned pregnancy the relative risk of mental health problems is no greater if they have a single elective first-trimester abortion than if they deliver that pregnancy,” and yet, there are numerous studies proving quite the opposite. I would suggest both Butcher and Redman read the book, Women’s Health After Abortion: The Medical Psychological Evidence, in which they will find ample evidence-based studies that conclude there is indeed a link between abortion and subsequent mental disorders (see sources below). Can Butcher honestly claim she has never met a single woman who has been negatively affected by abortion? The plethora of medical literature would prove otherwise.

SHORE Center is affiliated with the for-profit pro-abortion organization, International Planned Parenthood Federation, as well as Action Canada for Sexual Health and Rights and the National Abortion Federation, all of which promote and advance abortion rights in Canada and around the world. The SHORE Centre used to be known as Planned Parenthood Waterloo (PPW) and not surprisingly became abortion providers following Health Canada’s approval of the abortion drug, Mifegymiso in 2017. I can understand how telling women that abortion can affect their mental health would be detrimental to an organization that is in the business of abortion, but shouldn’t those providing abortion be duty bound to inform women of all of the associated health risks so that they can make an informed choice?

I do agree that all advertising must be fact based, but it’s evident Butcher’s objection is ideological, rather than substantiated in fact or anecdotal encounters.

The hasty decision to remove the ads sets a dangerous precedent that erodes freedom of speech not just for pro-lifers, but for everyone.

In a similar complaint to Butcher’s, the Supreme Court of Canada ruled in 2009 that the Canadian Charter of Rights and Freedoms protects political advertising on public transportation. The Court said that “citizens, including bus riders, are expected to put up with some controversy in a free and democratic society.”

Even though the ads in question are not political, members of Kitchener Right to Life are utilizing their fundamental right of freedom of speech, guaranteed by the Charter. Not liking a particular message, does not negate this right.

I find it disingenuous for Lindsey Butcher, of the SHORE Centre, to claim that women are not affected by abortion. As someone who works in the pro-life movement, I’ve encountered countless women who regret their decision to abort. They lament the fact that no one told them how they would suffer.

Butcher cites a single study concluding there are no mental health risks, but I would suggest she read the book, Women’s Health After Abortion: The Medical Psychological Evidence, in which there is ample evidence indicating a link between abortion and mental disorders.

SHORE Centre became an abortion provider following Health Canada’s recent approval of the abortion drug, Mifegymiso. I can understand how telling women they may be affected negatively would be detrimental to an organization that is in the business of abortion, but shouldn’t they be required to inform women of all risks?

I do agree that all advertising must be fact based but Butcher’s objection seems ideological rather than substantiated in fact.

The removal of the ads erodes freedom of speech guaranteed by the Charter and even the Supreme Court of Canada concluded in 2009 that “citizens, including bus riders, are expected to put up with some controversy in a free and democratic society.”

Disliking a message, does not negate this right.