The following article is written by Brian Lilley, host of BYLINE of SunNews Network. 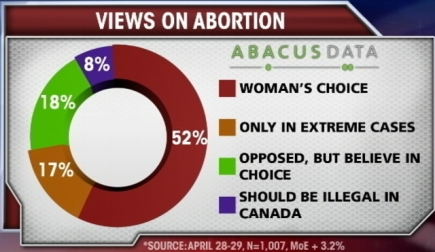 OTTAWA – The majority of Canadians believe there should be some restrictions on abortion, according to a poll conducted ahead of Thursday afternoon’s annual March for Life on Parliament Hill.

The results fly in the face of the political consensus in Canada in which all major party leaders at the federal and provincial levels are committed to the status quo.

In Canada, there is no law on abortion and the procedure is funded with tax dollars through the health system, another issue where the country differs from their political masters.

“I think there is a disconnect between what Canadians are telling us in this survey and what politicians were talking about during the campaign,” said Abacus Data CEO David Coletto.

Abacus surveyed 1,007 adult Canadians on April 28 and 29. The poll found 59% of Canadians believe there should be some restrictions on abortion as pregnancy proceeds.

More than one quarter of Canadians, 27%, said that human life should be protected from conception onwards, 21% said there should be protection after three months of pregnancy and 11% after six months. Only 22% agreed with the status quo which is no legal protection until a child is born.

“Politicians are out of touch with Canadian sentiment,” said Andrea Mrozek, manager of research at the Institute for Marriage and Family.

Mrozek also thinks most media are out of touch with public sentiment on this issue.

“We’ve been told that women are of one unanimous opinion on abortion, and that women are overwhelmingly pro-choice,” Mrozek said. “As it turns out this poll shows much more diversity and even much more of a pro-life sentiment amongst women.”

The poll shows that 63% of women believe in restricting abortion either before or at the sixth month compared to 56% of men.

While politicians shy away from the issue, Abacus found that most Canadians are ready for a debate.

“The majority of Canadians say that when discussing big issues like this we shouldn’t be afraid of debate,” Coletto said, adding that while there is support for restrictions there is no strong desire to completely outlaw abortion.

“When it comes to abortion there are shades of grey and it shouldn’t be treated as a black and white issue.”

To view Brian’s show on the subject, place this link into your browser:
http://www.sunnewsnetwork.ca/video/addressing-abortion/941797687001