The Pain of Abortion Lasts a Lifetime 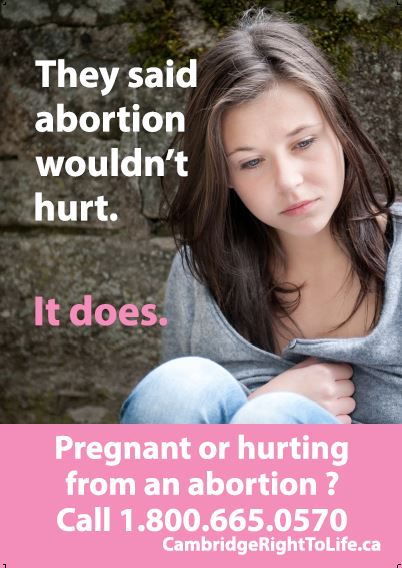 Within hours of the ad going up, the sign case was found hanging open and the poster removed.

We’re used to people rejecting the pro-life message, but we’re left wondering if there is something more behind the sabotage to our ad, since this ad recognizes what few are willing to admit; Abortion Hurts!

Unborn children are not the only victims of abortion. Abortion hurts women as well. Scientific studies reveal that many women suffer in silence after abortion.

If you’re suffering from abortion, know that there is help and healing.

Visit the following websites for more information and please read the story below to know you are not alone.

Our ad is now back up at the Delta, but we hope that who ever took it down will find the courage to face the pain in their life and truly find peace.

8 Unbelievably Heartbreaking Quotes From Women Who Aborted Their Babies

By Nancy Flanders
Printed by Lifenews.com/Reprinted from Live Action News

We as a society are constantly bombarded with the pro-choice rhetoric that abortion is sometimes necessary. We also hear the words of post-abortive women like Cecile Richards who will say that their abortions were the right thing to do. But whether they are stuffing down their emotions or just plain lying, abortion is never a happy ending.

It kills a child and leaves a mother to live the rest of her life with the knowledge that she took her child’s life. Nothing brings that pain to light better than the words directly from the mouths of everyday post-abortive mothers who are ignored by the major media outlets. Unlike Richards, these women have nothing to gain from sharing their stories. They only hope to help other mothers choose life.

“Two weeks after the abortion, I went into labor. I staggered into the bathroom. And there, with my husband beside me, I delivered a part of my baby the doctor had missed. It was the head of my baby. . . I’ll wake up in the middle of the night, thinking I hear a baby crying. And I still have nightmares in which I am forced to watch my baby being ripped apart in front of me. I simply miss my baby. I constantly wake up wanting to nurse my child, wanting to hold my child. And that’s something the doctor never told me I would experience.”

Abby Johnson, Founder of And Then There Were None:

One day in the car, my daughter (out of nowhere) asked if someday she would be able to see her siblings in Heaven. I asked her what she meant…honestly, hoping that she was not talking about my own two abortions. She said that she knew I had two abortions and she wanted to know if she would ever get to meet those babies because she said, “in my heart, I miss them.” I never knew I would pass that sort of heartbreak on to my children.

My abortions live in me, and unfortunately, they live in them. ”

Now that my son is 4 years old, I sometimes look at his sweet face and wonder what features my other child would have had. I still have dreams about holding him or her and it makes me so deeply sad to think that I have robbed my son of a sibling. Why not just try and conceive a sibling for him today you may ask? Well, I would love to but my husband and I have been struggling with infertility for two and half years. I never once dreamed that I wouldn’t be able to conceive when I wanted to! Every night my sweet boy prays to God for a sibling and every time I hear those precious prayers my heart aches over what I did. Because in retrospect an abortion isn’t an easy fix or a solution to a problem….it is the problem, and it leaves a lasting effect on generations to come.

“I killed two of my children, robbed my parents of grand-children, and murdered my son’s siblings. These abortions directly caused a medical condition known as incompetent cervix which resulted in the premature birth of another son who died after a week long struggle in the NICU in 2001. The suffering I’ve endured and caused others is immeasurable and the guilt almost drove me suicidal. I am a coward in every way.”

“Ross likes to tell me that Annie is our son’s guardian angel, but that idea scares me. Do I want my son’s protector to be someone whose mother gave her up? Ended her existence prematurely?  She must be so mad, disappointed and hurt. So I keep her ultrasound images, along with a Hallmark “It’s a Girl!” card that my best friend sent, along with a Christmas tree ornament engraved with Annie’s due date, which my parents gave me the week I found out I was pregnant, locked away in a closet far from my son’s bedroom. […] But Annie still haunts me. When her due date rolls around, or when our son has a bad cough, or with the birth of my sister’s baby girl — I think of Annie. And once every year — on her birthday — I let myself cry. I think about how it would feel to hold her in my arms. And then I ask her to please understand that I did what I thought was best for my child.”

Beatrice Fedor, Member of the Silent No More Campaign:

“I flushed my baby in the toilet and it was horrifying. And it didn’t help me to graduate. It’s been nineteen years and to this day, I don’t have a degree. […] Seven years later, I got pregnant again. The father was twice my age and he was abusive. Abortion was the quick fix solution to protect myself and my baby from the abuser. So I went to a clinic and in great anxiety, I was put to sleep. When I woke up with blood on my legs, I burst into tears and I was inconsolable. I sank deeper and deeper into depression and suicidal thoughts.

Then, I met my husband and he brought Jesus into my life but I was still hurting. When I was pregnant with our first child, my abortions resurfaced and the guilt was overwhelming. I went to counseling and I started to heal. Later, I attended a Rachel’s Vineyard Retreat and finally, I was able to forgive myself and find peace.

Abortion promised to free me from two crisis situations and instead, it has nearly destroyed me. But there is hope for all those who are hurting and it is for them that I am Silent No More.”

“[…]January 6, 1989, at 9 1/2 weeks gestation, I had an abortion. It nearly killed me. No, not the surgical procedure, the psychological aftermath. I attempted suicide three times after my abortion and finally ended up in an adolescent psychiatric ward of a community hospital for a month to recover. […] Working in the autoclave room was never, ever easy. I saw my lost child in every jar of aborted baby parts. One night after working autoclave my nightmares about dead babies were so gruesome and terrifying and intense I met with the clinic’s director to talk about my feelings. She was very understanding, open and honest, and painfully forthright when she told me, “What we do here is end a life. Pure and simple.”

“After napping [after the abortion] I was raring to get back out to the bar scene. There was not enough whiskey in DC to satisfy me that night, or any night for many months following. When I woke up the morning after my abortion, Brian asked how I slept. I said, ‘Like a baby.’ He said, ‘You mean like a baby KILLER?!’ […] For months after that, I knew nothing except that I wanted to die. Death was the only certain escape from the horrific pit that had formed in my soul. I begged for therapy. I screamed for help. But only inside. How could I admit what I had done?

I trudged through several more years, feeling happy at times and doomed at others. One day I was running and listening to a homily by Fr. Larry Richards about Confession. He said (loosely), “If you’ve had an abortion, confess it. Your child is praying for you in Heaven.” My chest heaved with uncontrollable sobs and I ran home to arrange an appointment for Confession with my dear Priest. There in the confessional, heaving with sobs once more, I truly expected to be struck by lightning. I now sat there acknowledging that I was guilty of the worst sin possible, murder. My dear Priest smiled and handed me a box of tissues and said, ‘God is so happy you are here. You will be forgiven, but you need healing.’ He then proceeded to tell me about Rachel’s Vineyard, a ministry aimed towards healing from abortion.”

These are just eight of the women who are speaking out about the aftermath of their abortions. Lifetimes of pain and regret. Lifetimes spent yearning for a child they will never get to hold. Due dates come and go and always bring about another year of remorse. Abortion isn’t something someone does one day. It lasts a lifetime.