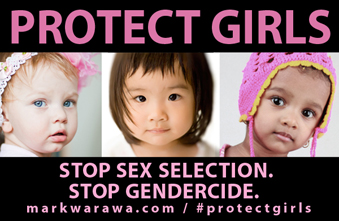 Cambridge, May 13, 2013 – Conservative Member of Parliament, Mark Warawa will be in Cambridge on Thursday, May 23rd to speak at Cambridge Right to Life’s Annual Coffee & Dessert evening taking place at The Pines at 7:00 pm.

Mr. Warawa, who introduced a motion to condemn the practice of female gendercide in Canada, continues to raise awareness that the discrimination against girls through sex-selective abortion is problematic in our country and around the world.

“The UN says that over 200 million girls are missing in the world right now because of female gendercide”, says Warawa whose motion was deemed non-votable on March 21st despite having met all of the criteria to move forward.

The non-binding motion stated: “That the House condemn discrimination against females occurring through sex-selective pregnancy termination.”

The failure of Warawa‘s motion to even reach the floor of the House of Commons resulted in a backbench revolt that changed the speech rules. In a landmark decision, MP’s now have the right to seek the floor by “catching the Speaker’s eye” rather than being dependent on the party-provided list of speakers.

“Mr. Warawa has not only caught the eye of the Speaker of the House but also that of the majority of Canadians who oppose all forms of discrimination and violence against women and girls,” said Camilla Gunnarson, Director of Cambridge Right to Life.

To interview Mr. Warawa on May 23, 2013, please contact Camilla Gunnarson, Director of Cambridge Right to Life at 519 222 4421 or email info@cambridgerighttolife.ca