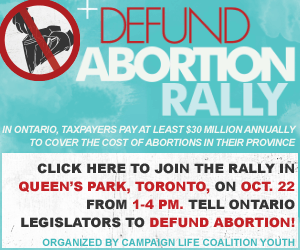 Campaign Life Coalition Youth is organaizing a rally on Saturday, October 22nd, 2011 at Queens Park from 1:00-4:00 PM to tell our newly elected provincial government to stop using our hard-earned tax dollars to fund the killing of innocent preborn children.
CLCY holds the position that government-funded abortions are a blatant abuse of tax dollars, are severely unjust, and that these funds can and MUST be directed away from the killing of our preborn children. This is an issue that should be held close to the hearts of young people in particular. They did not have a choice to stand-up against the Morgentaler decision, but they have a choice now. Let’s use it. They are the survivors and it’s their job to speak up for those who cannot speak for themselves. Let’s join them!