Local Coverage of the National March for Life 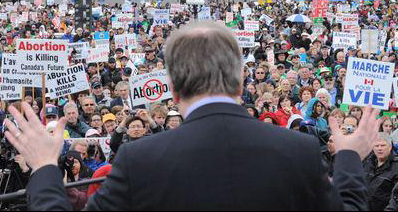 Below is an article featured by The Record on the March for Life.

Sean Kilpatrick – OTTAWA
Thousands of people marched through the streets of Ottawa today in the annual March for Life demonstration.

Prime Minister Stephen Harper rejected Stephen Woodworth’s private member’s bill in late April, but that didn’t stop critics from accusing the Tories of using the proposed legislation as a back-door way to rekindle debate over the sensitive topic.

While it was difficult to measure the size of the crowd on Parliament Hill today, there appeared to be fewer people than the more than 15,000 that the Campaign Life Coalition estimated attended last year’s event.

The protesters called on the government to legislate protection for all human beings from the time of conception to the moment of natural death.

The event commemorates the day in 1969 when Parliament first legalized abortion under certain circumstances.