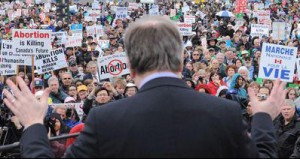 On May 24th, MP Stephen Woodworth will be guest speaker at Cambridge Right to Life’s Annual Coffee & Dessert Evening.

While Prime Minister Harper has made it clear that he will not open the abortion debate, that hasn’t stopped Conservative MP Stephen Woodworth from challenging the government to re-examine when a child is considered human under Canadian law.

“Cambridge Right to Life has never been under any illusion regarding Prime Minister’s Harper stance on abortion, said Camilla Gunnarson, Director of Cambridge Right to Life, “but we were literally shocked when Mr. Harper stated he was disappointed that Mr. Woodworth’s motion was deemed votable by the House of Commons committee.”

“Canada is a democracy, not a tyranny. An informed intelligent debate on the floor of the House of Commons is long overdue. Anyone who is not willing to look at what science has to say about life in the womb in2012 is skewing reality.”

It is a sad day when those who claim to hold to the principles of democracy are willing to throw women and their children overboard for their own political expediency.

“MP Stephen Woodworth is at least willing to ignite a discussion,” said Gunnarson.