Note: According to teacher organizer, Mrs. Tania Rosario, actual number of students who participated was 350. Click here to view video. 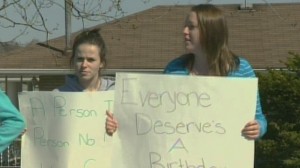 A group of students from a Cambridge high school took to the streets Wednesday to speak out against abortion.

More than 100 students from Monsignor Doyle Catholic Secondary School made their way to sidewalks on Myers Road, calling on the federal government to re-open its debate on when life begins.

Kitchener Centre MP Stephen Woodworth introduced a controversial motion to the House of Commons asking that very question, but it was soundly defeated last fall.

But the protesting students say the question remains an important one.

“We do believe that this is the human rights issue of our time, and that abortion does need to be talked about. We need to break down those walls, especially in Parliament,” said student Victoria Fernandes.

A spokesperson for Planned Parenthood Waterloo Region says she doesn’t think the students’ protest will find a wide audience.

“Canadians across the country have made it very clear they’re not interested in re-opening the debate,” said Sharon Dea.

But both sides say they have no issue with discussion of abortion in general terms.

“Look at that evidence and think about the moral issues thoughtfully and with care,” said Dea.

Student Ashley Chaves agrees, saying she hoped the protest would get her fellow students to consider the issue.

“At least if (the protest) gets them thinking, then it’s better than ignoring it altogether,” she said.

Several of the students who protested Wednesday say they plan to do the same as part of the March for Life rally in Ottawa next month.