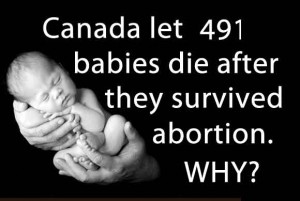 We were told that the minister will likely not be available to meet with us but we will present the following letter.

Statistics Canada recently released startling figures which indicated that between 2000 and 2009, 491 Canadian babies, of 20 weeks gestation and greater, were left to die after failed abortions1 (does not include stillbirths).

There are several things that are troublesome about this data; I will address two:

Firstly, Canada’s justice system is failing those members of the human family who are the weakest and most defenseless. The Criminal Code has provisions for addressing the violation of the rights of a born child. Section 223 (2) states, “A person commits homicide when he causes injury to a child before or during its birth as a result of which the child dies after becoming a human being.” Where is the justice for the 491 babies?

Today’s modern medical advancements enable babies as young as 21 weeks gestation to survive and flourish. Why do we turn a blind eye to the medical neglect and killing of some babies simply because they were slated for abortion?

Honorable member, this is an important issue that can be looked at without opening the abortion debate.

We believe there should be a parliamentary inquiry into the 491 deaths of these children. If the Criminal Code has any teeth, Canada should provide protections, including emergency medical care, for children who survive abortion.

No matter where you stand on the abortion issue, all Canadians should be horrified that babies with beating hearts, arms, legs, fingers, and toes were left to die at the hands of someone who rendered their existence voiceless.

Please help us obtain justice for these children.

I look forward to your response.

Reference:
1. These abortions are coded as P96.4 or ‘Termination of pregnancy, affecting fetus and newborn’. http://www5.statcan.gc.ca/cansim/a26?lang=eng&retrLang=eng&id=1020536&paSer=&pattern=&stByVal=1&p1=1&p2=-1&tabMode=dataTable&csid